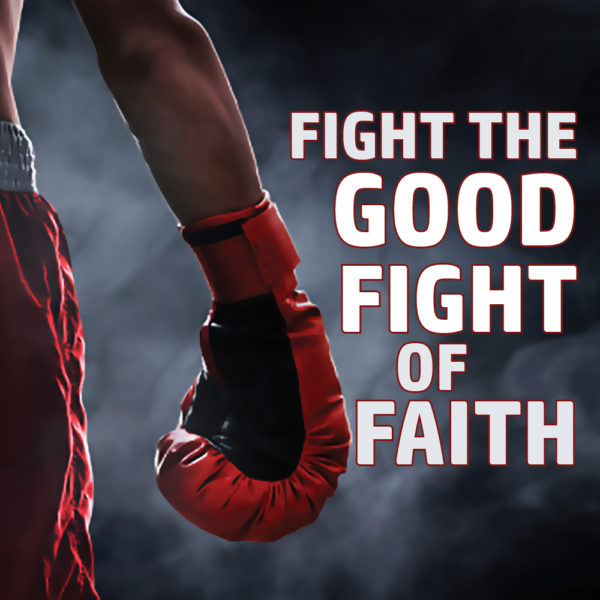 The Apostle Paul is writing to Timothy, often described by him as “My son in the ministry.” This implies that Paul has a relationship to Timothy, not only to a Christian brother but also to someone in whom he has made an investment of teaching, friendship and fathering. So this command to fight the good fight of faith is one that is given to insure Timothy’s success by someone who cares about him personally. When we care for someone at this level, we want to give our best counsel. This is important information. If Paul gave this admonition to Timothy, then we should take heed to these words and obey this command. What is the good fight of faith? Why is it necessary for us as Christians to fight? What or whom are we fighting? Is this a winnable war?

Terms like “fight” and “war” are not popular in this day. We are living in the aftermath of the “Peace Movement” of the 1960’s and 1970’s. In order to accept this command to fight the good fight of faith, we have to challenge our normal mode of thinking, and realize that there is something that we must fight. Since God’s word is timeless and ageless, His commands are to be followed no matter what age it is. So let us examine what the good fight of faith is all about and what it is we are fighting.

Rx: Acts 10:38 ~ How God anointed Jesus of Nazareth with the Holy Spirit and with power, who went about doing good and healing all who were oppressed by the devil, for God was with Him.

Have you ever known anybody who was disobedient to his own hurt? Such persons are lovers of themselves rather than lovers of God. Serving self leads to sin. Sin leads to death. We have to fight the desire to please self and serve sin. This is part of the good fight of faith. Did you hear what I said? This is a good fight. It is good to wrestle with bad habits, damnable lifestyles and sinful desires. It is good to wrestle with these until we kill them and lay hold on eternal life. Eternal life is the all-powerful, holy life of God. This is the highest form of living. This is the more abundant life that Jesus told us He came to give us. It is attained by fighting the desires of the self-life and laying hold of eternal life.

We must fight our adversary, the devil. There is a power that fuels the self-life. It is the power of iniquity. Iniquity is defined as sinfulness or wickedness. Iniquity was found in Lucifer. It appears to have been some type of perverted power that he turned in toward himself when he said that he would exalt himself above God. By his own thinking and desires and plans to exalt himself, he became filled with iniquity. Prisons are filled with persons who were disobedient to their own hurt, even after many warnings. Such disobedience moves a person beyond rational limits of self-control. They are out of control and must be controlled from without. Such a person may have some good skills or even good qualities, but the iniquity that resides in us all has gotten a strong grip on him and is causing him to disobey over and over again. This is how Lucifer became Satan, our adversary. He started out as the anointed cherub and wound up our adversary.

A person who is extremely selfish may be tempted to steal, lie, or hurt other persons by his selfish behavior. Satan is able to tempt such persons to do wrong because they are motivated to keep self alive through their disobedience. Satan works through desires that satisfy the flesh. He works through lust, which is an uncontrolled desire of any type. He works through pride, which is a desire to promote oneself to the hurt of another person. He works through the thought life of the person who is focused on self either through fear, ignorance, insecurity or any vehicle that will cause the self-life to be prolonged or enhanced. The devil is our adversary. Adversaries must be fought and conquered if we are to lay hold on eternal life.

We must fight the world’s values and the world system. How does the world get a grip on us? Through the things that we behold. God made us in His image. We function in many ways as God does. We are people of vision, just as God is a God of vision. We are influenced by what we see. When Satan tempted Jesus in the wilderness he showed him things that were within his power to give him. Through Adam’s sin Satan became god of this world and rules through the power of iniquity. When we see the wealth of this world we are tempted with iniquity. This is why Paul also admonished Timothy to not love the world’s wealth for we have brought nothing into this world and can take nothing out of it. Instead we are to lay hold on eternal life by renouncing the pleasures, values and desires of this world.

The natural extension of the self-life is to rule the world. The carnal man desires to rule other men. God never gave us dominion over each other. We all have God given positions of leadership in one area or another, but lordship is another thing. Since Jesus was due to inherit the Lordship of the world, anyhow, it was easy for Him to turn Satan down. We need to understand this: if we lay hold on eternal life, we will rule and reign with Christ. This is done only through denying the self-life to rule us. The good fight of faith causes us to rule over worldly desires, by living every day in God’s kingdom of inner righteousness, peace and joy in the Holy Ghost.

The good fight of faith is one of faith in God. Jesus gave His life for us. He gave His life in exchange for ours. This means that if we are born again, we have the power to die to the self-life. This power is given to us freely through faith in God’s word. Whatever we give to Jesus, He exchanges it for something better, more powerful. When we fight the self-life we take on His life. This is the life of faith, power, and joy. It is the good life. That is why the fight of faith (believing what God says about us and acting like it) is a good life.

We must believe in God’s plan to redeem us and to preserve us faultless in spirit, soul and body. If we are to be faultless, we must let the Word of God transform us. There is life in God’s word. If we feed on the Word through meditating upon it and renounce the hidden works of darkness and the dictates of our carnal flesh and self-life, then we will be real children of God and eternal life is ours. When we can say, as Paul did, “I have fought the good fight, I have kept the faith,” then we are free to lay hold on eternal life. As we become more in tune with God’s mind and heart, we free ourselves from the bondage of the self-life. Whom the Son sets free is free in deed. We are free to obey God, develop the Christian lifestyle and gain rulership with Christ for His Kingdom while we are here on earth. Oh, the good fight of faith. Hang in there. It’s worth it.