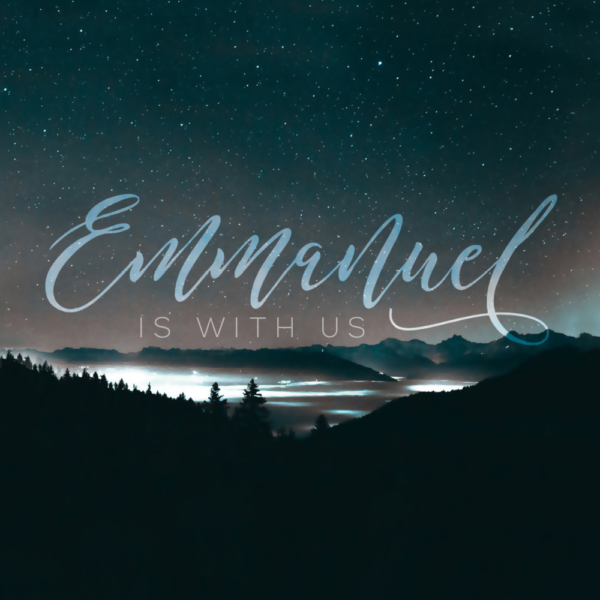 “Behold, a virgin shall be with child and shall bring forth a Son, and they shall call His name Emmanuel” (which being interpreted is, “God with us”).
Matthew 1:23

Now behold, two of them were traveling that same day to a village called Emmaus, which was seven miles from Jerusalem. And they talked together of all these things which had happened. So it was, while they conversed and reasoned, that Jesus Himself drew near and went with them. But their eyes were restrained, so that they did not know Him.
Luke 24:13-16

Jesus has been raised from the dead. It is not yet Pentecost, when the disciples have been promised power from on high, but it is the day of His resurrection. One of the names of Jesus is Emmanuel, meaning “God with us.” He sets out to demonstrate who He is as two persons are walking toward Emmaus, a city in Palestine.

Two disciples are walking and talking about Jesus. It was common for road companions to meet at the crossroads and begin to discuss current events. You could tell if someone was going to be good company for you if that person “agreed” with your point of view… at least enough to get to your destination. The scripture that tells us to agree with our adversary quickly while we are in the way with him refers to that custom.

Even if you don’t agree, you can for the sake of making it to the end of the journey. The fact that Jesus appears and walks alongside of them means that He is in agreement with them. He listens as they converse.

And He said to them, “What kind of conversation is this that you have with one another as you walk and are sad?”

Then the one whose name was Cleopas answered and said to Him, “Are You the only stranger in Jerusalem, and have You not known the things which happened there in these days?”

And He said to them, “What things?”

So they said to Him, “The things concerning Jesus of Nazareth, who was a Prophet mighty in deed and word before God and all the people, and how the chief priests and our rulers delivered Him to be condemned to death, and crucified Him. But we were hoping that it was He who was going to redeem Israel. Indeed, besides all this, today is the third day since these things happened. Yes, and certain women of our company, who arrived at the tomb early, astonished us. When they did not find His body, they came saying that they had also seen a vision of angels who said He was alive. And certain of those who were with us went to the tomb and found it just as the women had said; but Him they did not see.”
Luke 24:17-24

Jesus can’t quite get with their mood. This should be the happiest day that has ever occurred on the earth, yet these men are sad. Their conversation further saddens them. Jesus begins to question the reason for their sadness, and they tell the story of His life, death and resurrection. They have heard that His tomb is empty and that angels have reported that He is alive. This is shouting news, but they are still sad because of their unbelief. There is joy in faith… there is hope in believing. Emmanuel has come to bring all of these to the people.

Then He said to them, “O foolish ones, and slow of heart to believe in all that the prophets have spoken! Ought not the Christ to have suffered these things and to enter into His glory?”
Luke 24:25-26

The stranger on the road begins to rebuke his companions. This is unheard of. Traveler’s protocol demands that you agree with your adversary, especially if you’re the odd man out. Jesus invades their conversation and then begins to upbraid them. This could leave the traveler stranded with no one to walk with Him. It could, unless that person has the power of truth on His side.

When one has truth on His side, He is able to make a bold statement that others cannot resist. This is Emmanuel’s ministry. He wants to bring us into contact with infallible truth. He explains that all that was done regarding Jesus was foretold by the prophets, so that He could enter into His glory. Jesus then begins to recount the account of His life as told in the scriptures.

And beginning at Moses and all the Prophets, He expounded to them in all the Scriptures the things concerning Himself.

Then they drew near to the village where they were going, and He indicated that He would have gone farther. But they constrained Him, saying, “Abide with us, for it is toward evening, and the day is far spent.” And He went in to stay with them.
Luke 24:27-29

Jesus finishes His discourse and is about to leave the pair. They ask Him to continue walking with them. This is very unusual for travelers who begin in a disagreement. Disagreeable companions are usually abandoned in a hurry, and usually suffer loss because of it. Lone travelers are easy prey for robbers and murderers.

That’s why Jesus admonishes us to agree with our adversary quickly while we are on the road with them. Even if they agree with you while walking, they may want to rid themselves of you because they want to avoid strife while they travel if you are a disagreeable sort of person.

Strife causes one to lose his way, and invites wickedness into the situation. But these men invite Jesus to continue… the Prince of peace has brought life and hope to these men. What started out as contention ends in peace because of Emmanuel.

Now it came to pass, as He sat at the table with them, that He took bread, blessed and broke it, and gave it to them. Then their eyes were opened and they knew Him; and He vanished from their sight.
Luke 24:30-31

The breaking of bread is the revelation of God. When the covenant is cut, the lesser is blessed by the greater. The men who were darkened in their understanding are now brought into the light. The spirit of revelation hovers over the communion table, and Emmanuel allows His body to be broken for us in revelation.

When God is with us, there is nothing dark about us if we will yield to the spirit of light, love, faith and hope. This is what Jesus left with these two disciples. Their hearts burned within them when Jesus broke bread, symbolizing that they had been delivered out of darkness and translated into the Kingdom of God’s dear Son.

Communion with God means we partake of His body and are made whole. Constrain Him to dwell in you in a fuller way during this holiday season.